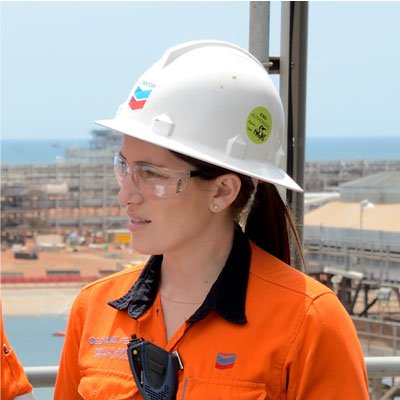 A science graduate from UWA, Georgie Feakes started her career working in health and safety in the iron ore sector but soon realised she actually wanted to work in practical roles at the ‘coal face.’ She was accepted into the Chevron Women In Engineering program and quickly started making strides in her new career.

Georgie was the only female in her Production Technician Traineeship at Chevron Australia and was one of the few people in her cohort to be offered ongoing employment before the completion of a two-year traineeship. She assisted with the commissioning of both the Gorgon and Wheatstone gas plants and has since become only the second female at Chevron Australia to be learning the Domestic Gas Plant panel.

Georgie has been active in the Chevron-funded Women in Engineering program and was on the events team for the Women In Oil And Gas organisation.

She also aspires to be a proactive voice in normalising mothers returning to work on site. Georgie resumed FIFO work six months after giving birth to her son in 2018, pioneering the creation of a breastfeeding room on site. For 10 months she expressed milk while on site and then transported frozen milk home in preparation for her next stint away – a process she plans on repeating when her daughter is born in April 2021.